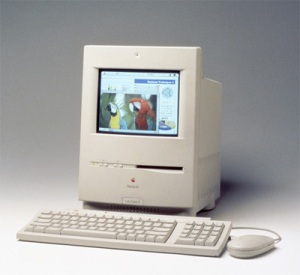 In the Fall of 1993 I needed a computer for school and luckily had a Mac fanatic for a neighbor. The moment he discovered I was looking he pointed me in the right direction and I've been a Mac guy ever since. I used my first Mac, a Color Classic II named Murray nearly everyday until 1997 when it had become obvious that the old guy, who had handled the basic text of the 1993 internet, would not be able to cope with the modern internet. The iddy biddy hard drive did not have enough space for much of anything not to mention the memory or processor. There was no way I was going to keep up with web browsers and other modern software. So I tucked Murray into a closet and upgraded to a new Mac. (Yes, I've named most of my Macs and yes some of us were on the net back then, some even earlier!)

Now, I'm not going to list and describe every Mac I've owned since Murray but I will tell you that I've worked my way through 13 Macs running everything from Mac OS System 7.1 to the current operating system, Mac OS X 10.10 In those 23 years I learned the basics of word processing for school and then moved onto desktop publishing and design for the community groups I worked with. From there it was the internet and my first website hand coded in 1997. I've tried my hand at publishing a newspaper and filming/editing documentary films on my Macs using everything from Adobe Indesign to Pages, iMovie to Final Cut Pro. In 2010 Apple introduced the iPad and I ordered one the day they were available. I'd not yet purchased an iPhone so this was my first iOS device. Being in a remote location I had no phone line and no internet so the iPad with cellular was also my only in-home internet access. It meant no more trips to town to check email and do work.

My current set-up relies on a 2018 iPad Pro 12.9 and a late 2012 Mac Mini attached to two Asus LED LCDs. One is a 27" and the other 22". I started with an Apple bluetooth keyboard which is an excellent keyboard but replaced it with a Logitech K811 which I’ve had for a couple years. I think this is the best keyboard I’ve ever used. Bluetooth pairing between the Mini and iPad was super simple and switching between them as fast as hitting a single button. The keyboard backlight turns off automatically when not in use and turns on instantly when my fingers are placed on it. The slightly concave keys feel great and unlike the Apple keyboard (my previous favorite) this keyboard has backlighting.

As for my most used apps, on the Mac: Pages, Affinity Designer, Affinity Photo, and InDesign, for design work that can't be done on the iPad. General purpose computing is accomplished with a variety of Apple apps: Numbers, Mail, Safari, iTunes, Calendar, and Photos. Messages and Slack for communications. These days the Mac is mostly just used for InDesign and as my iTunes/Plex media server. 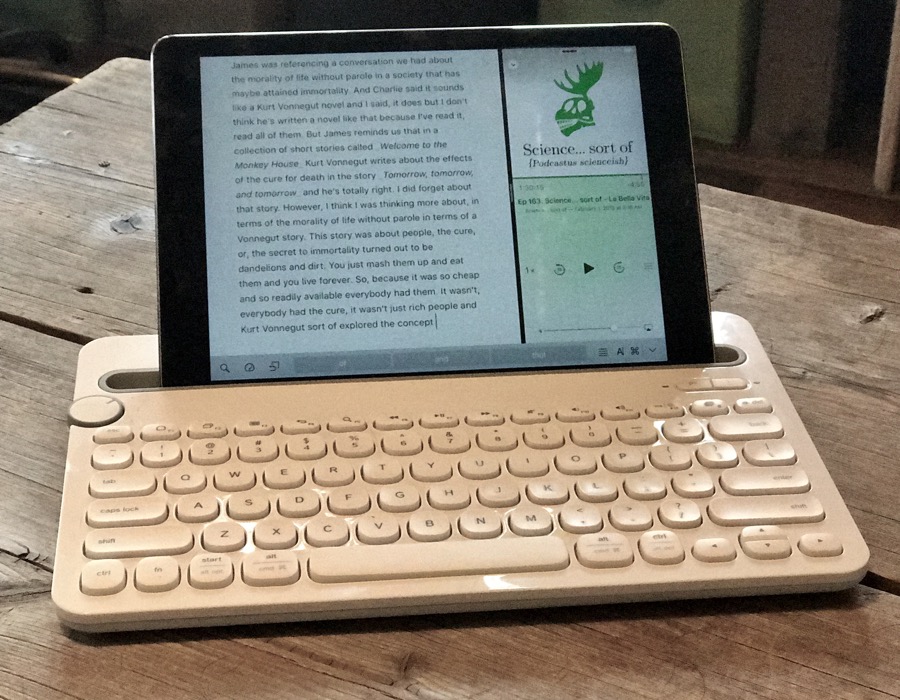 In the summer of 2016 I sold my MacBook Pro and made the iPad Air 2 my primary computing device. It was more than powerful enough for all of my non-design work such as website updates, transcriptions, email, word processing, and general office duties. I started keeping a journal of sorts chronicling the switch to an iPad centered workflow.

The iPad Pro took over as my primary computer in June of 2017 when the 12.9" was updated. It's like the Air 2 only much faster and of course the larger screen. I use several keyboards with it. Initially, the Apple Smart Keyboard which is fantastic but which lacks backlighting and media playback control. I also use the Brydge keyboard. It allows for the iPad to be used very much like a MacBook Pro but with two huge benefits. Of course it runs iOS and it can be easily lifted from the keyboard and used as a tablet. No Mac laptop can do either of those. I also use the above mentionend Logitech keyboard when I want to have the iPad raised at a higher level. This works well for extended periods of typing so that I'm not looking down.

2019 Update: Now using the updated late 2018 12.9 iPad Pro and Apple's Smart Keyboard Portfolio. This is, essentially, a faster, slightly smaller iPad. Apple's first party Smart Keybord Portfolio is a huge improvement over the previous design and has allowed me to replace the heavier Brydge keyboard.

For work, my most used apps are Textastic for html editing and ftp, Affinity Photo, Affinity Designer and Pages are my primary tools for designing or laying out documents. I use iA Writer for blogging and transcripts. Also trying out Drafts 5 for some of that work. The most recent test is Kodex which I'm trying out in conjunction with Textastic for coding html/css. It lacks the ftp feauters that Textastic has but I prefer it for actual text editing. It's much faster and has a very nice visual sidebar for scrolling documents. It also uses the iOS system for file management. In other words, it really looks like it belongs on the iPad. So many other apps have their own custom interface for file management (Textastic being one of them) and while they usually work pretty well I've come to prefer the "native" look of the Files app interface.

Other apps that see daily use are Safari, Newsify, Workflow, Messages, Slack, Numbers, Reminders, and Notes. As an amateur astronomer SkySafari gets alot of use along with Numbers for recording observations with the iPad that are later transfered to FileMaker Pro on the Mac.

With Mavericks and iOS 7 the convenience of always in sync everything was a fantastic feature making switching between devices mostly frictionless. It got better with El Capitan and iOS 9 both of which performed exceptionally for me. I'm currently using iOS 11 and macOS Sierra, both have been fantastic.

Practically everything seems to sync in one way or another. iCloud has been fantasic in recent years. While I rarely have need to work on any device other than my iPad Pro I know that all of my important files are synced sholud I need to work on another device.

I’m VERY happy with my standing desk and intend to continue working there when my work requires a Mac.

A few other bits of gadgetry worth mentioning. Keyboards. Apparently, I collect them. My latest is the Logitech K480 which is great with the iPad. It's a bit heavy because it also serves as a base for the iPad Air 2which fits into a slot above the keys. It has a handy dial for pairing with multiple bluetooth devices. I've currently got it paired with the iPad and iPhone. Handy. I also picked up the Logitech Keys-to-go for shorter, on-the-go typing. Super light weight and works great for quick trips to the library or coffee shop. Nothing I want to type on for long periods though.

The iPhone X has been great for keeping up with email, twitter and RSS as well as reading books. Other tasks for the iPhone usually include scanning documents with Scanner Pro, remote control for iTunes and AppleTV. The hotspot feature has also been a real plus for getting things done while on the road.

For entertainment I use an Apple TV that gets 3+ gig of video/music content from my 2012 MacMini. Media is stored on an WD My Book 4 TB drive.

A few of our local favorites: